Identifying the version of a WorkVisual project

Usually, when it comes to software, the general consensus is that the newer the better.

However, in the world of industrial automation, things are not quite like that.

The stability of industrial equipment is essential for the production chain. A "novelty" used at the wrong time and place can stop a production line and cause losses of thousands or even millions of dollars.

Although the reasoning applies to different software and contexts, I will now speak specifically about KUKA WorkVisual.

The most current versions of WoV * can handle projects created in older versions.

However, whenever a newer version is used ** to open a project created in an older version, it is converted ***.

And that's where problems can start ****.

It is already common sense that the best version to edit a robot's WoV project is the one with which the project was created.

In some situations - especially where there are robots with customizations - the end customer may require that specific versions of WoV must be used. This is very common in automakers, for example.

In the past, WoV was delivered on a CD, which came with the controller documentation. In newer versions, the installation usually comes in the D: drive of the robot, as well as the KOPs (KUKA Option Package).

Checking the version that came with the robot is a good start, but nothing guarantees that the project that is working has been compiled with that version.

Below are two simple methods to check which software version a WorkVisual project was last compiled on.

WorkVisual 4.0.x and above

From version 4.0.x, things have become a little more comfortable.

WoV has a little tool with a graphical interface (not very evident), which brings various information about a project, without having to open it in WoV.

Select a file associated with WorkVisual (usually a .wvs or .asz file) and right click.

Note that in the context menu there is the option Information. Click on it. 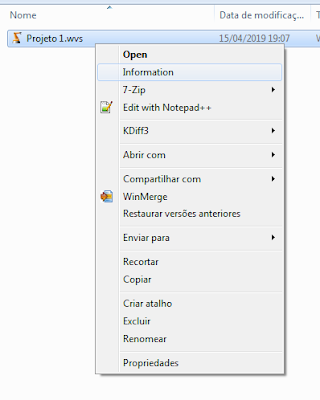 A window containing various information about the project will open. What interests us, in this case, is the Modifications tools field, which indicates which version was used to compile the project. 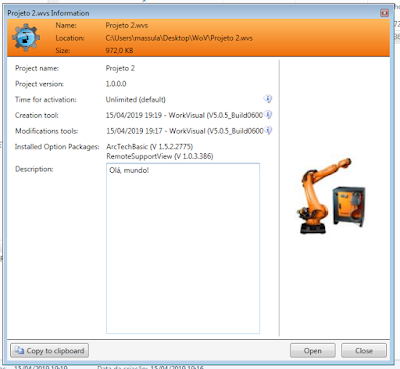 WorkVisual 3.1.x and below

There is no graphical tool In older versions, but it is simple to obtain the same information.

Each time a project is compiled, some files that are automatically generated by WorkVisual have their headers changed, and one of the information is precisely the version of WoV used to compile (and not save) that project for the last time.

I always check this information in the KRC_IO.xml file, which will be present in every KRC4 controller, but it appears in other automatically generated files.

These files are usually in the folder:

They can be opened by WorkVisual 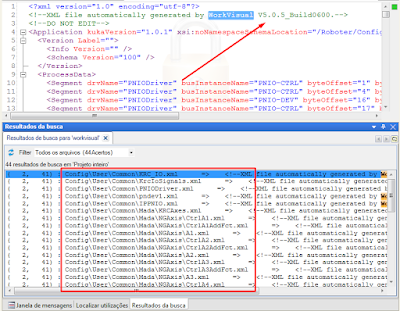 Even if WorkVisual is not available on the computer, it is possible to open the KRC_IO.xml file (or any of the other automatically generated files) in a text editor. In the screenshots below I used Gedit and XMLNotepad, respectively. But even Windows Notepad will do the job.

Note that this method can be also used for projects created in more current versions.

I hope these tips are useful.

** The WorkVisual version is always composed by three numbers. The conversion occurs when there is a change in the first or second number, for example, 3.0.7 to 4.0.31. But if the version difference is only in the third number (which usually indicates bugfixes), there is usually no problem. WoV 3.0.7 can open and edit projects created in 3.0.10, and 4.0.21 can open and edit projects created in 4.0.31. In any case, it is good to take into account the rules mentioned above. Check in which version that project was created, and when in doubt, consult the customer. This can save you several headaches.

*** When a newer version of WoV converts a project created into an older version, a copy of the original version is created. This copy is usually given the suffix "_bak".

**** And we will not even talk about versions of KOP installed on WoV that are different from those installed on the robot.
Postado por Marcio Massula às sexta-feira, março 26, 2021